Publications that covered this story include: The Times, Express, Yorkshire Post and City AM on 24 June 2019.

The boom in artisan gin sales continues to attract entrepreneurs to set up distillery businesses. Other craft drink groups have also been expanding into distilling, for example, Brewdog and Chapel Down now both produce gin and vodka.

Whilst our research has shown that the number of craft breweries seems to have peaked, (only increasing from 2,266 in 2017 to 2,274 in 2018) there has been no similar slowdown in the craft spirits sector.

Start-ups are using unusual flavours and limited-edition gins, such as nettle or Yorkshire Tea, to differentiate themselves. The addition of new varieties of gin has allowed the segment to maintain its novelty amongst consumers, discouraging trend following customers from moving to a different drinks category.

Following the rapid rise in popularity of niche, artisan gins, there has been a similar growth in craft rum labeled by some as a ‘Rumnaissance’. The number of rum brands available on the UK market is rapidly approaching 200 in 2018, up four-fold from 50 in 2006**.

Previously the rum market had been dominated by Caribbean rum, however, an increasing number of rums entering the market are now branded as UK rums; e.g. Bristol Black Spiced Rum and Premium Harrogate Rum.

Consumers now expect pubs to offer an ever-wider variety of artisan spirits, giving the market the ability to accommodate a larger number of gin and rum companies. However, they warn that shelf space is finite.

The fastest growth in the number distilleries was in England where the number of distilleries increase 34% to 98 in 2018, up from 73 in 2017. Whilst Scotland, dominated by whiskey production, only increased by just 8% to 79, up from 73.

James Simmonds, head of the drinks sector at UHY Hacker Young, says: “The UK craft spirits industry continues to build on the success of gin and is now a global powerhouse in the artisan spirits market.”

“Consumers now expect when they walk into a pub to be greeted by a huge range of flavoured spirits behind the bar and that has helped the smaller spirits producers.”

“The experimentation that craft gin companies have, has enabled artisan gin to remain in the spotlight longer than many expected.”

“The big manufacturers have had to react and are introducing more varieties such as pink gin.”

“To sustain their growth craft distilleries will need to continue to chip away at the market share of the big brands and not allow them to catch up with their position as the exciting innovators.”

Number of distillery businesses in the UK continues to grow, up 21% last year 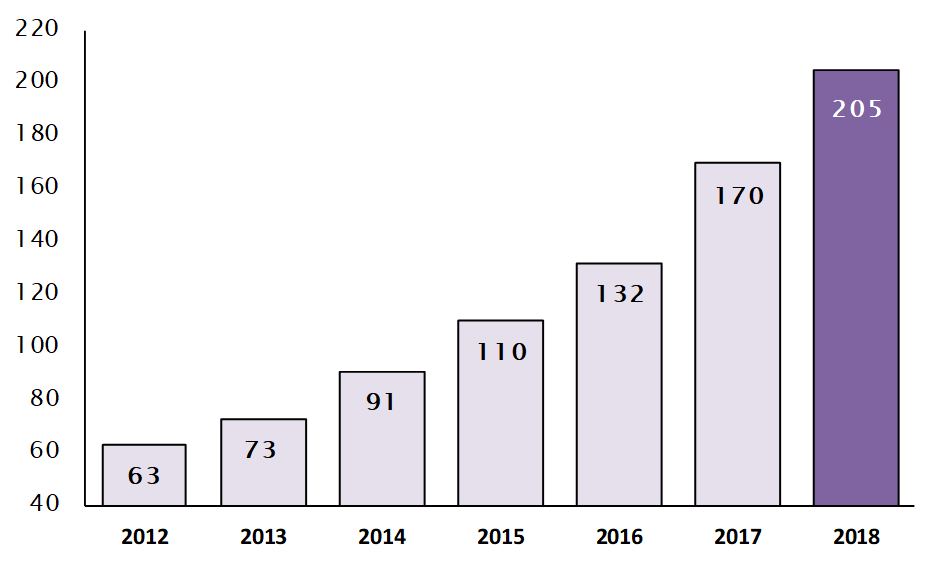